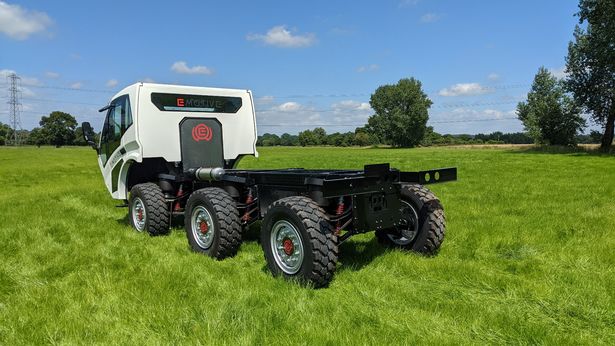 When Devon-based EMotive decided to turn to Crowdcube to fund the next stage of development for its pioneering off-road commercial electric vehicle, the intention was to get its name out there and generate a bit of interest.

But what happened next outstripped all their expectations.

What started as a farmyard ‘tinkering’ project for Emotive founder Bruce Palmer back in the 90s has resulted in Scarab, the world’s first electric-powered six wheeled off-road vehicle.

It’s a prototype but the interest in getting it made and on the market has been massive.

The Crowdfunder campaign surpassed its £180,000 funding target in just four days when in launched in January and to date has secured secured more than £272,000 for the business with 560 investors.

And beyond that, EMotive has caught the attention of some significant global players who are serious about manufacturing the vehicle.

Dan Regan, managing director, who has been with EMotive since 2019, said: “I was blown away with the Crowdcube response.

“We thought we might get a few commercial enquiries off the back of it but it totally exceeded our expectations and we have had commercial interest from all around the world – Canada, Dubai, Australia, Switzerland, Saudi Arabia – 30 different countries in total.

“We have had parties who are interested in manufacturing our E-ATV (electric all terrain vehicle) fly in from Saudi and Australia, they have actually driven up this muddy lane in Cullompton in their posh cars to visit us and for us that is such a wonderful feeling.

“They’ve arrived here and they cannot believe that a vehicle like this actually exists, that’s why they’ve come to see it with their own eyes.”

EMotive is now in advanced talks with a manufacturer in the Middle East who wants to roll-out EV fire trucks at their multi-million pound production facility using the EMotive design.

“Potentially, it’s a deal that could be worth hundreds of millions over the next five years so we are very excited about that,” said Dan.

EMotive is not planning to manufacture its vehicle itself but instead licence the ‘intellectual property’ of its chassis base, effectively handing over a build book for its design to firms that want to use it as a basis for their own vehicles.

EMotive believe that the global market is worth billions. Its design can be used for everything from fire trucks, construction and agricultural machinery to people carriers for adventure tourism used in places like Iceland for exploring the volcanic landscape.

Dan said: “To get this far by securing the funding and this level of interest really does feel like all the hard work developing this behind closed doors for so long is now paying off.”

It is hoped the six-wheeler E-ATV platform will move into mass-production as soon as Q2 in 2023.

The lead up will include a recruitment drive over the next 12 months to expand the team.

The fact that the Scarab has got to this stage of design and testing is down to the foresight of Bruce Palmer who decided to halt the project for want of the components needed to make an electric off roader which just weren’t available at the time.

Crucially, though, he picked it up again when electric cars started to hit the market, first with the hybrid Toyota Prius in 1997 and the Renault Zoe launched in 2013.

Dan said: “By picking it up again when he did, he was such a visionary , he could see that the future was electric. If he had not gone with that, we would not be ahead of the game now in terms of being the world’s first which is what gives us the competitive edge.”

Bruce has a history of building commercialised multi-million global business including Forthglade Pet Foods, and Elemental Digest Systems. Together with fellow shareholders Steve Reeves and Lionel Curtis, they have ploughed upwards of £1.5million into the EMotive business.

Now, EMotive has grown to a five-strong team that brings experience from Supacat, Flybe and Formula 1, and has been involved in the development of technology for Caterpillar, Lotus, Ministry of Defence and McLaren Automotive.

They have had to engineer and design much of Scarab from scratch and it’s been as much about error as trial.

Dan said: “You have to give people permission to fail. Often people are scared of failure but failing is a requirement of moving forward. By trying to do something and failing, you have found the ways not to do it and that means you’ve learned something.”

In recent years, there has been a sea change in attitude towards electric vehicles with consumers becoming more serious about climate change and the market responding.

EMotive’s E-ATV addresses a huge gap that currently exists for 6-12 tonne ATVs. It’s a market where the Government’s Transport Decarbonisation Plan means that the sale of new internal combustion engine (ICE) vehicles weighing from 3.5 to 26 tonnes, will end in 2035.

Dan said that climate is no longer a ‘marketing phrase’ and with demand for EVs in the car market outstripping supply, there is more reason than ever for the supply chain to respond with the development of new technology.

Essentially, there is now enough demand to make the research and development for them worthwhile.

Dan said: “If we look back and think at one point, the electrical components were simply not available, now we are pushing suppliers to create what we need and they can see that we are on to something.”

For fleet owners, the big advantage of EVs are that they have fewer moving parts. There is no traditional engine – all the moving parts are in the wheels. There is, for example, no gearbox, drive shaft or prop shaft to go wrong.

All this means a reduction in maintenance and servicing time and smart tech can spot problems before they happen.

A limiting factor is the battery life. Fully charged in about 20 minutes, the reality is that for most off road jobs, the Scarab needs a range extender – basically a 600cc petrol, diesel, hydrogen or synthetic fuel power unit that generates power for the battery.

There will be no quick fixes for the ‘green revolution’, explains Dan. Batteries themselves rely on the mining of minerals like lithium and while the aim is to get to hydrogen power or synthetic fuels, we are not there yet.

Dan said: ” And we won’t be for a couple of decades. Our design has to be fuel agnostic because, for our range extender, if it wasn’t we would be cutting out a huge part of our market.

“There is no perfect solution but as long as the problem we create is less than the problem that we are trying to solve then that’s progress.”

And even if we could switch to EVs overnight, there simply isn’t enough total battery power available yet or enough electricity in the National Grid to make that happen – that is if, of course, you could find a charger in the first place.