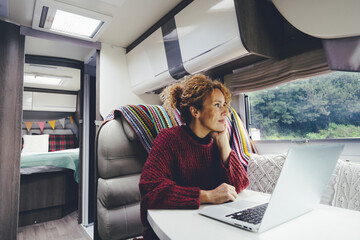 Thor Industries’ Vision Vehicle RV concept promises 300 miles of range, although the company provided no specifications as to battery size or type.

No word on whether the Vision Vehicle RV is intended for production, but at the very least it proves RV makers are entering the EV era with the rest of us.

Even recreational vehicle manufacturers are preparing to bid adieu to the internal-combustion engine. Need proof? One day after Winnebago revealed its battery-electric e-RV concept, Thor pulled the wraps off of its plug-in Vision Vehicle concept.

Like the e-RV, the Vision Vehicle concept uses Ford’s Transit full-size van as a base. However, whereas the Winnebago concept packs a mere 125 miles of manufacturer-estimated range (one less than Ford’s estimate for its most efficient E-Transit model), Thor claims its RV offers up to 300 miles of driving range. Credit the hybrid nature of the Vision Vehicle concept’s powertrain, which consists of a “high-capacity” battery pack (Thor’s mum on the pack’s actual energy capacity) and a range-extender with its own onboard fuel cell that allows “for a variety of fuel options,” including hydrogen, per a Thor spokesperson.

Inside, Thor fits the Vision Vehicle concept with a bespoke dashboard fit with multiple digital displays. This includes a digital gauge cluster ahead of the driver, a large center-mounted infotainment screen, and a pair of displays mounted at the top corners of the dash, each of which displays a feed from the RV’s rear-facing cameras that serve the role of rearview mirrors.

Those are far from the only highlights of the Vision Vehicle concept’s insides, as Thor fits this RV with luxurious living quarters that include plenty of niceties, including a kitchen replete with a large display that rises from the countertop and adjustable frosted glass windows for additional privacy.

No doubt, Thor seems intent on eventually producing a model like the Vision Vehicle concept. When the company plans to actually reveal a production-ready vehicle of this nature, however, is anyone’s guess. Regardless, the Thor Vision Vehicle concept certainly proves that the EV-era will not mark the death of the RV.