Home > powersports > The Toyota 4Runner TRD Pro is a great off-roader, but that’s all 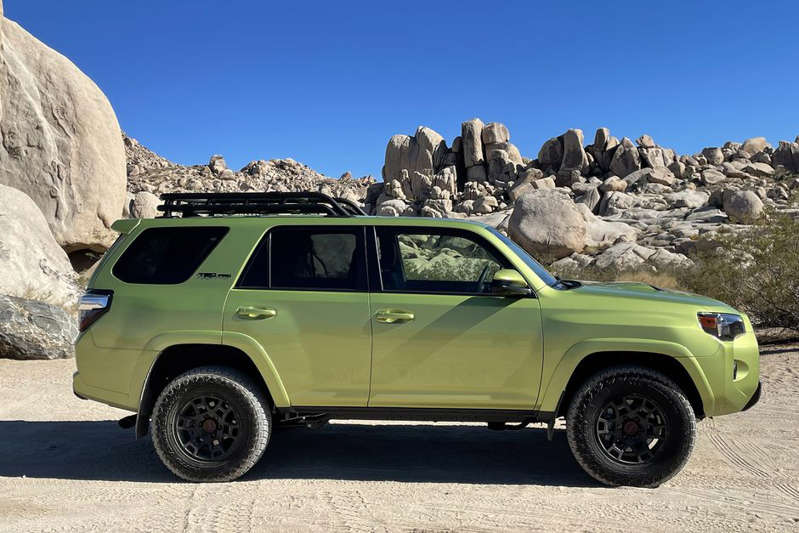 The Toyota 4Runner TRD Pro is a great off-roader, but that’s all

The fifth-generation Toyota 4Runner has been around since 2010, but this tried-and-true SUV gets a few new features for 2022. LED lighting is standard and there’s a new rear-occupant reminder, and most trim levels now come with blind-spot monitoring and rear cross-traffic alert. There’s also a fantastic new Lime Rush exterior color that will kick your eyeballs into your brain.

Nobody buys a 4Runner TRD Pro for its stellar on-road performance. The ancient 4.0-liter V6 delivers 270 horsepower and 278 pound-feet of torque, but acceleration is sluggish at best. This engine has a pleasant growl, but I wish it backed up that noise with actual oomph. The five-speed automatic transmission works fine, shifting smoothly, but with so few ratios, the 4Runner’s fuel economy is pretty poor. The EPA rates the 2022 4Runner TRD Pro at 16 mpg city, 19 mpg highway and 17 mpg combined. During a week of testing, I only saw 16.2 mpg.

The TRD Pro’s on-pavement ride quality is stiff, bouncing me over every little bump at highway speeds. What’s good, however, is that the cabin is largely free of wind and road noise, which is especially surprising considering the TRD Pro is shaped like a brick and wears knobby Nitto Terra Grappler tires.

However, if you want to get off the beaten path and away from it all, not many SUVs can off-road like the 4Runner TRD Pro. I’ve driven the 4Runner in the mountains of Colorado and the red rocks of Moab and I’ve never come across an obstacle this SUV couldn’t handle. For this review, I head to Berdoo Canyon near Joshua Tree National Park. It’s a mostly easy but fast course with a few obstacles that require low-range four-wheel drive, engaging the locking rear differential and careful tire placement.

On flatter sections of this trail, the TRD Pro’s Fox 2.5-inch internal bypass shocks shine, allowing me to get through curves and small whoops at high speeds. With 33 degrees of approach angle, an 0.3-inch thick aluminum skid plate, a departure angle fo 26 degrees and 9.6 inches of ground clearance, I have no problem getting through Berdoo’s first rocky section.

The 4Runner’s multi-terrain select system has modes for mud, sand, moguls and the like. This tech is nice for newbies but I like that I can just keep the 4Runner in its standard mode and get through the rough stuff with my own skill. The thing I don’t like is the multi-terrain monitor camera system, which has a video display so blurry it’s better to just get out and scout myself.

The TRD Pro’s interior is designed for function above all, and I like the chunky knobs and buttons. They’re easy to operate while driving on a bumpy trail. The center console is plenty big, as are the door pockets, but there isn’t a lot of space to securely stow smaller items. Behind the second row of seats you’ll find 47.2 cubic feet of space, expanding to 89.7 cubes when the bench is folded flat. Most 4Runners have two rows of seats but you can get a small, fold-down third row on the SR5 and Limited if that’s your jam.

While the 4Runner is an admirable performer off road, there are just so many little things about this SUV that need to be better for daily livability. The standard backup camera is just as bad as the multi-terrain monitor. The 4.2-inch information display in the gauge cluster is low-res and bad. The infotainment system is sluggish (though thankfully Apple CarPlay and Android Auto are standard). There’s only one USB port. The sun visor isn’t even adjustable.

People still love the 4Runner for what it is, but the competition keeps pushing Toyota farther and farther back in the pack. Good as it is off road, it’s not worth the money for something so old