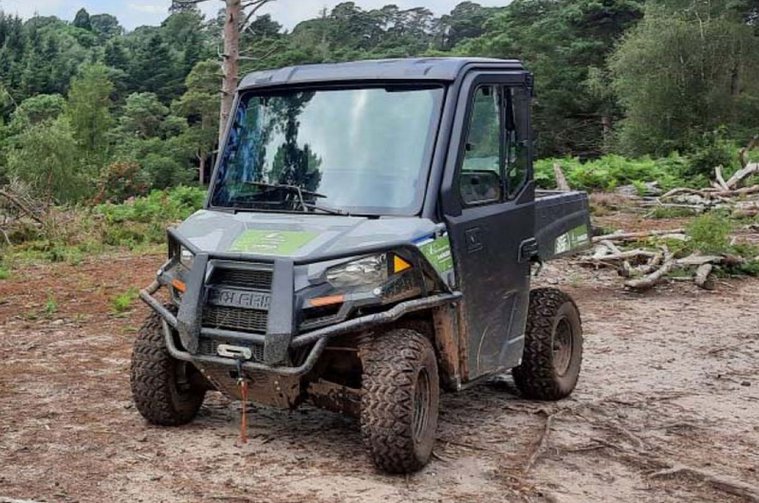 The electric all-terrain vehicle helping to maintain a country park

Maintaining 400 acres of land within Rushmere Country Park isn’t an easy task – especially when trying to minimise damage to the environment. So the team looking after the large Bedfordshire site, which features woodland, heathland and meadows, have acquired a pair of electric all-terrain vehicles (ATVs).

The Greensand Trust, the independent charity that maintain the landscape, wildlife and history of Rushmere Country Park, has bought two Polaris Ranger electric vehicles to navigate the varied terrain of the large site.

American off-road specialist Polaris offers a range of ATVs and is aiming to fully launch the latest version of the electric Ranger in the UK later this year. It comes with a 48-volt AC induction motor, with a 14.9kWh battery giving a range of around 45 miles. It has a 226kg box capacity and 10in of ground clearance. Polaris also offers a range-topping Ultimate version of the Ranger EV featured a 29.8kWh battery that has a range of around 81 miles.

Dan Doyle, Rushmere Country Park’s head ranger, said: “We were so impressed with their ability off-road and they’re a good match with the charity’s green ethos of renewable energy and reducing emissions.

“They are great for a day’s work as the battery lasts well around the vast park, without needing to be recharged.”

The electric all-terrain vehicle is used for day-to-day checks, as well as transporting materials in the load bed to carry out repairs to paths and tracks.

Greensand Trust added that the Ranger EV was useful thanks to its quiet operation which prevented any disturbance to wildlife and visitors.