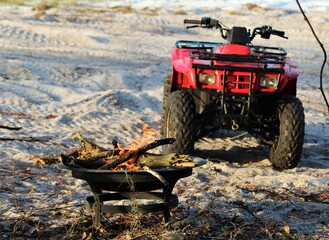 The District of Hudson’s Hope is gearing up to start phase two of its ATV campground at Dinosaur Lake, and the creation of its first campsites.

Phase one was completed last year to put the grounds and roads into place, and phase two will build out one block of the campground with 10 campsites complete with picnic tables, firepits, and site markings.

The district council has pre-approved $150,000 in capital spending toward the project for this year’s budget.

Mayor Dave Heiberg expects that half the sites may be open this year, though no timeline is in place.

“If everything goes accordingly, it’d be nice to have this place open,” said Heiberg, noting no tenders for work have gone out as the 2022 budget has yet to be finalized.

“What we try to do is pre-approve certain capital projects that have been historically of benefit to us,” he added. “If we can get staff to work on these RFPs in the early part of the budget cycle, we have a greater opportunity to get more interest in tenders and a better price.”

The new campground was pitched to the province more than two years ago, with the district receiving a $20,000 provincial grant for the project in 2019, and $100,000 set aside in reserve funding. The site will be separate from the 17 district-owned campsites that already exist at the lake.

Heiberg says rustic-style bathrooms as well as bear-proof waste and recycling bins will also be installed at the new ATV campground.

Operational expenses for the campground would be partially funded through camping and firewood fees. It’s expected that the ATV campground will help curb unauthorized camping on vacant Crown land, such as Geddes Bay near Williston Lake.