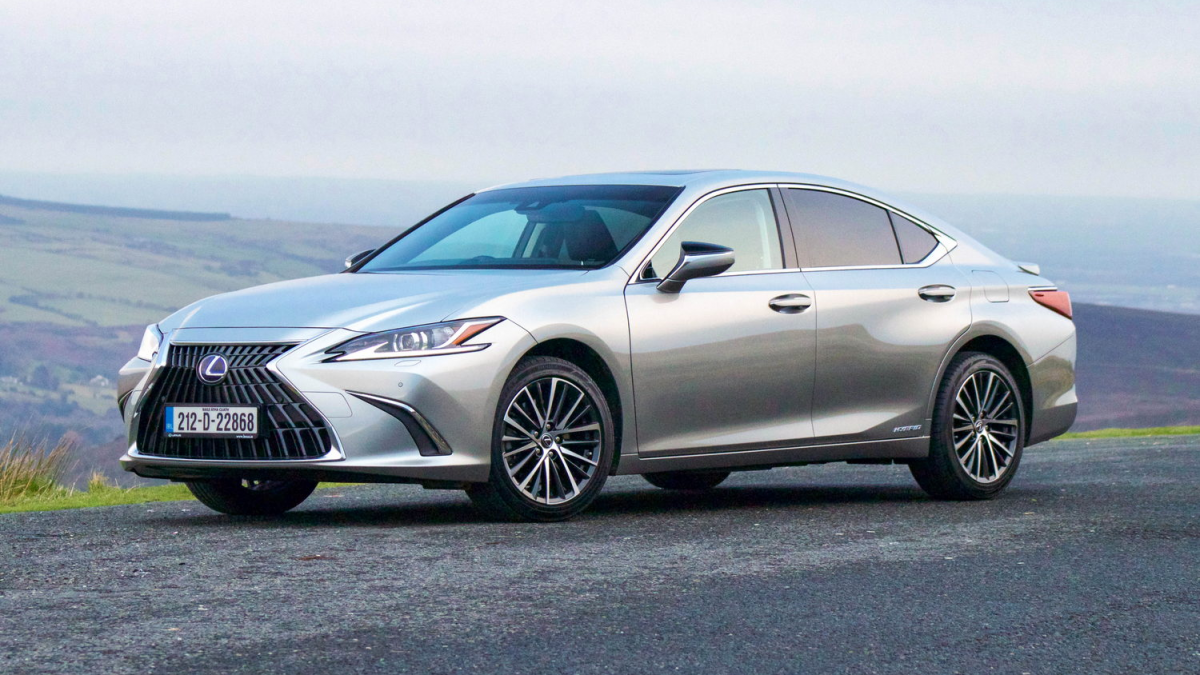 Lexus ES 300h overview
Lexus’ hybrid-engined rival for the likes of the BMW 5 Series, Mercedes E-Class and Audi A6 has always been a touch low-key. In spite of its sharp styling, it ever seems to be under the radar, which is possibly a touch unfair. For 2022, Lexus has given the ES a series of updates and upgrades and we’re testing the – very well-equipped – base-model ES Dynamic version here. Have all the updates given the ES 300h the ammo to take on the might of the Germans?

The ES 300h model range
The ES 300h has a pretty simple model line-up, especially when compared to the broad range of engines and lengthy options lists of its rivals. There’s just the one engine – a 2.5-litre hybrid, that also sees service in many other Lexus models – and three trim levels. Does that leave it feeling a bit underwhelming, when compared to the German big three? Possibly. Then again, buyers are clearly becoming increasingly switched on to hybrid power, and many manufacturers are slimming down their trim and option offerings, so perhaps Lexus was just ahead of the game in that respect.

Upgrade to a €58,945 F Sport model and you get quad-LED headlights, adaptive suspension, active high-beam headlights, an eight-inch instrument panel, paddle-shift controls for the gearbox, heated front seats that come with a special F Sport design and black-finished 19-inch alloys.

ES Dynamic models have CO2 emissions of 124g/km. That goes up by 1g/km for a Premium model, and one more to 126g/km if you want an F Sport.

Lexus currently has a PCP finance offer for the ES 300h, with monthly repayments starting from €409, but check the Lexus Ireland website for the most up-to-date prices.

The Lexus ES 300h interior
While Lexus’ round up updates for the ES 300h are pretty subtle, it’s in the cabin that you’ll spot the biggest one. There’s a new 12.3-inch infotainment touchscreen mounted in the centre of the dash. It’s up high, and also some 100mm closer to you than that of the old ES 300h. It persists with the fiddly trackpad controller mounted down on the centre console, but it works much better if you just jab the screen itself with a finger. There’s also standard Apple CarPlay and Android Auto, which helps. As well as the wireless charging pad, there are multiple USB sockets in the dash and under the huge centre armrest (which cleverly is hinged from both sides so that your passenger can use it too), as well as more sockets in the back.

The instrument screen is on the small side, at just seven inches across the diagonal, but the graphics are nice and clear, and thanks to some artful shaping of the instrument hood, it doesn’t look quite as small as it actually is.

You sit exceptionally low and laid back in the ES – something that’s much more noticeable if you’ve just stepped out of an SUV – and headroom is relatively tight. I’m just over six-feet tall, and found that the top of my head was close to the roof-liner. That’s true too for those in the back seats, but the good news is that there’s plenty of legroom, so for the most part even taller passengers will be able to get comfortable.

The rest of the interior is a bit of an interesting mash of old and new. Sitting alongside the big new touchscreen is a rather classy analogue clock, while below it are very traditional buttons for adjusting the heating and air conditioning. Further down again, there are more buttons for minor systems, a storage space with the wireless phone charger, two cupholders and the gear selector. One small snafu – the switch for the electric parking brake is tucked down out of sight by the steering column. Admittedly, the brake does engage and disengage automatically, but it might have been handier to keep it up where it’s easier to find.

Of course, a major high-point of the ES 300h’s interior is the sheer quality – that’s something that Lexus has been famed for ever since the launch of the original LS 400, and the ES keeps the tradition going. Admittedly, higher-spec versions have slightly more in the way of ritzy trim, but this basic Dynamic model is more than pleasant enough.

The Lexus ES 300h driving experience
Two things clearly matter to the Lexus engineers – refinement and refinement. The ES 300h is a car that, unlike its German rivals, doesn’t even bother to try and be sporty. That’s not to say that it’s not good to drive, but it’s a car that satisfies in other ways.

The hybrid engine has decent, if unexceptional, performance. Thanks to the electric assistance, there’s good step-off acceleration, and the long roar of the engine as you build up speed has at least been quietened compared to older models with a CVT-style gearbox. It still does hold on to revs for a slightly uncomfortable length of time, but you get used to it. Overall economy is incredibly good – Lexus quotes 5.5 litres per 100km, and we pretty easily averaged 6.2 litres per 100km over a week of mixed motorway, country and city driving.

The hybrid system is impressive, and it’s noticeable how often you’ll be cruising around town on just battery power. Lexus claims that its hybrids can spend as much as 80 per cent of their urban journeys running on electric power, and it’s quite a believable claim, and you’ll certainly benefit from the extra urban refinement.

Lexus has upgraded the suspension and brakes for 2022, and through a series of corners the ES 300h grips pretty well, but understeers early so it’s not an enthusiast’s car. Better by far to take it on roads with long straights and long-radius corners, where it can show off its refinement and comfortable ride quality to the best. That ride can get a little busy around town, where short, sharp ripples send up a little more noise and movement than you’d ideally like, but on the open road the ES 300h has a really lovely loping gait, easily flexing over large bumps and lumps and soothing out big crests.

Wind noise and tyre noise are largely absent, although you do have to have the stereo turned up a little more than is perhaps ideal if you’re listening to audio books rather than music – perhaps the upgrade to the Mark Levinson stereo would be worth it.

The boot is slightly small – at just 454 litres – and of course is a little less versatile as it’s a separate boot rather than a hatchback. Lexus does not even offer folding back seats. There’s also no estate variant, as offered by most of its rivals.

Sitting down low amid a sea of SUVs might unnerve some drivers, those who’ve gotten used to a higher driving position, but to be honest we find it actually feels safer down there. Certainly, the ES 300h’s sleeker shape and lower seating position pay dividends when it comes to wind noise and long-haul fuel economy.

Our verdict on the Lexus ES 300h
It would be so easy to ignore the traditional Lexus ES 300h in favour of more modish alternatives, such as the NX 350h and 450h+ SUVs, or one of its German rivals. The perception – and it’s only partially accurate – is that the ES 300h is an old-fashioned car in a fast-changing car market. That’s not quite fair, though. The ES 300h might well be more traditional, but if those traditions include comfort, refinement, fuel economy, low emissions and reliability that should see it passed on to your grandkids, count us in.