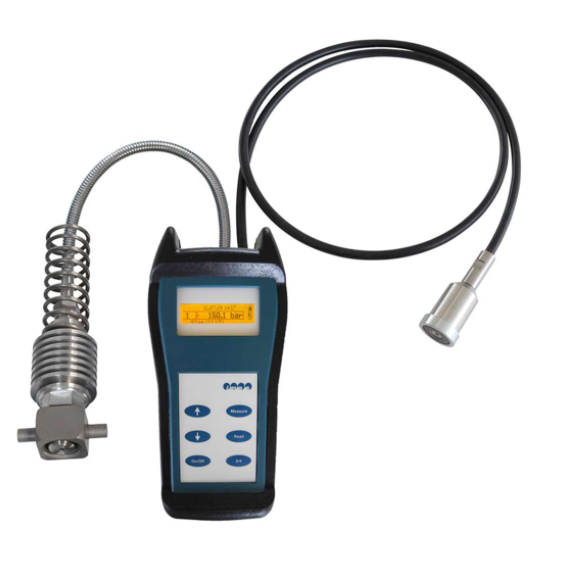 A vibration sensor has been designed by IMES that is electrically connected on one side to the hand-held device via a cable and on the other side via a magnetic holder to the injector or pump. The evaluation of the measured data will be processed by the EPM-XPplus visualization software.

By regular measurements during engine operation with the EPM-XPplus without vibration sensor the engineer can detect occurrent failure. Possible causes of failure could be a deviation from the mean indicated pressure (MIP), the peak pressure (Pmax) or compression pressure (Pcomp). The failure can be immediately identified by the analysis of the indicator diagrams. However, there are a number of effects that are hard to identify by only analyzing the indicator diagrams, especially failure at the high-pressure fuel system and failure at the control of the inlet valve and exhaust valve.

With the existing procedure of the cylinder pressure indicator system, the exact point of fuel injection and the valve movement cannot be determined or only inexactly determined. A direct measurement of these processes is very extensive.

The experience in the performance analysis of marine engines demonstrates that the analysis of vibration diagrams, which have been recorded parallel to the indicator diagrams, delivers very good results.

Marine engineers can achieve the following results by using the EPM-XPplus device including vibration sensor:

Phases of lifting and landing of the injector needle
Beginning and ending of the circulation of the heated heavy fuel in the fuel system
Phases of beginning of fuel supply and of shutdown of the high pressure pump
Phases of closing and in some cases of opening of the gas distribution valves
The user will get all this information directly during operation with the vibration sensor. The method described above also fulfills the requirements of the marine classification societies regarding non-destructive application as there is no need for mechanical intervention at the engine for installing the vibration sensor.