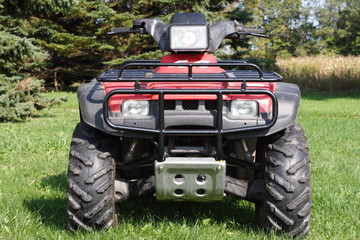 by admin December 1, 2021
All terrain vehicle

Most of us are guilty of putting our pickups through far more abuse than the factory ever deemed necessary? Sometimes, getting out to a remote blind or your favorite fishing spot requires traversing terrain that is not exactly pleasant. Rocks, ruts, tree roots, and erosion can make for a fun ride if you’re in the right rig, but a downright painful one if you are not. We’ve all felt the need for a kidney belt on a long washboard road, or felt that sting when a rock hits something potentially valuable on the underside of our trucks.

Yamaha Motors is in the business of designing and building vehicles made to traverse rough terrain, so you don’t have to subject your daily driver to it. Their latest and greatest recreational side by side is called the Wolverine RMax 1000. Since the beginning of 2021, I’ve been lucky enough to have logged over 1,000 miles of off-road seat time in Yamaha’s RMAX. I’ve ridden in four Western states, setting up camp alongside the Rubicon River, Lake Alamo, and most recently, the La Sal Mountains. I have packed camping and fishing gear, photography equipment, tools, construction equipment, and more in and out of some of the toughest trails imaginable. The RMAX has proven that it can provide an incredibly enjoyable driving experience, even when hauling massive amounts of gear.

For this latest test, I joined Yamaha’s design team at the Gateway Canyons Resort for a two-day, 240-mile trek across the La Sal Mountains on the Colorado-Utah border. We saw every Southwestern terrain imaginable in our two-day trip, covering elevations from 3,400 to 11,000 feet. The RMAX ran flawlessly at any height, handling the trail at incredible speeds even with all of our gear loaded in.

The Yamaha Wolverine RMAX 1000 Has Been Built To Last
The RMAX is welded and bolted together in Newnan, Georgia. Built on a steel tube and channel frame that is double coated for rust prevention, the RMAX should resist corrosion well. Steel skid plates cover the entire underside of the vehicle, protecting its vital bits from the elements below. (I recommend optioning for the $749 accessory UHMW skidplate set, as it makes contacts with rocky terrain much more pleasant and will save the steel skids from damage.) Yamaha is very detail-savvy and engineered in a lot of upgrades to keep the RMAX rolling longer. One such example is casting the front differential out of carbon steel rather than aluminum, making it more resilient to driveline shock and damage while out on the trail. The RMAX is designed to be a long-service-life vehicle, not a throwaway.

At its heart is an all-new 999cc liquid-cooled, dual-overhead-cam, twin-cylinder engine. It makes right around 110 horsepower at the crank, which is ample power to pull all 1,885 pounds of RMAX around on the trail. Yamaha pairs the fuel-injected engine with a belt-driven CVT, or continuously variable transmission. Dubbed “Ultramatic”, Yamaha’s CVT is a bit different than the competition. It features a wet, slipper-type clutch on the engine side of the transmission which pre-tensions the belt. This means that under times of increased driveline stress, the wet clutch will slip instead of the belt. This prolongs the belt life so much that Yamaha gives a 10-year belt warranty to every RMax 1000 owner.

Power is directed to the rear wheels by default, where a rear gearcase transfers power to both wheels in unison. The front drive features a differential that can be run in open or fully-locked modes, giving you true 100-percent, unfiltered 4WD in the “Diff Lock” mode. Drive mode settings are adjustable on the fly via a rotary knob on the dash, right next to the headlight controls. Power steering assist varies with speed and load, and the RMAX never tires the driver by demanding too much steering effort. Yamaha has the level of power assist dialed in very well, and the RMAX maintains great steering feedback through the wheel. This instills driver confidence by letting you know exactly what the front tires are doing without making the steering feel too heavy.

The RMAX features big brakes, too, to help bring it and a heavy load down from high speeds in a hurry. Each wheel is fitted with disc brakes and dual-piston calipers, combined with true 4-wheel engine braking to deliver great stopping power. The RMAX gives you the feeling it can stop and hold almost anywhere.

Performance from the RMAX powertrain is just as impressive at low speeds as it is when moving quickly. Yamaha put a lot of emphasis on low-speed drivability and how to make the RMAX perform perfectly at a crawl. They even created an accessory to allow the RMax to perform perfectly in any off-road situation, the D-Mode throttle controller. Available from the factory on the XTR and LE trim models or separately as a $299 accessory, Yamaha’s D-Mode controller offers you multiple throttle profiles for different driving styles. Featuring Crawl, Trail, and Sport modes, the D-Mode controller transforms the feel of the RMax’s engine with the flip of a switch.

If you set the D-Mode switch to Crawl mode, it slows down the throttle application and makes the pedal feel longer, allowing you to seemingly control each engine RPM with a flex of your big toe. Sport mode does the opposite, making the engine feel more lively while giving you the ability to put power down quickly out of corners. If you still need full throttle, it’s always available in any of the three modes—wide open is wide open. RMAX units not equipped with the D-Mode controller are programmed with the default, or “Trail” setting locked in. This offers a close to 1:1 throttle manipulation, with some computer wizardry to smooth out throttle judder on the trail.

A Versatile Gear-Hauler With an Impressive Cargo Capacity
Yamaha built the RMAX to carry gear, and it has a huge host of available accessories to help you do so. Its dumping bed can carry 600 pounds of cargo (two-seat models), and the RMAX can tow up to 2,000 pounds with its factory 2-inch receiver. Cargo boxes, spare tire mounts, gun boot mounts, windshields, fully-enclosed cabs, winches, plows, and more are all available right from your Yamaha dealer with OE-level fit and finish.

Inside the RMAX you will find a well-appointed cabin with padded contact points for the driver and passengers. On upper trim models like the Cobalt Blue LE model, Adventure Pro in-dash navigation and vehicle diagnostics come standard, as do push-button adjustable shocks and a Bluetooth-equipped SSV Works stereo system. A Warn winch, roof, and custom coloring are also standard on the LE model. The seating position is very comfortable, with a sliding driver’s seat and tilt steering. Full doors provide great coverage but do not impede visibility, which is fantastic over the hood, fenders, and out of the back over the bed.

The only place the RMAX falls short in the cargo department is that the tailgate is not rated for human weight, which eliminates a couple seats when stopped trailside. Changing the oil is also quite labor-intensive, as there are multiple spots to drain the oil from. However, my list of negatives for the RMAX so far is quite short.

The Yamaha RMAX Has a Top-Of-The-Line Suspension System For Rough Roads
Finally, the RMax’s defining feature: its suspension. Built on a sophisticated dual A-arm setup front and rear, the RMAX features a true four-wheel independent suspension with massive Fox Podium coilovers. The high-quality dampers provide three levels of compression stiffness, which can be adjusted without tools via knobs on the shock for base and XTR models, or via a switch on the dash for the LE model. The quality of travel is great, but the quantity is astounding.

A normal pickup truck will have around 6 to 10 inches of suspension travel. The first Ford Raptor changed the pickup game forever, offering 11.2 inches of suspension travel up front and 12.1 in the rear. The almighty Ram TRX can produce 13 inches of wheel travel up front and 14 inches in the back, providing an ultra-plush ride over big bumps. Yamaha swung for the fences and designed the 2-seat RMax’s suspension to cycle 14.2 inches up front and a whopping 16.9 inches in the rear. This translates to a jaw-droppingly smooth ride over massively uneven terrain, interrupted only by the occasional whack of a rock to the tire.

Yamaha’s RMAX is available now, in two and four-seat configurations. The four-seat model comes with a neat convertible cargo bed system that allows you to change the rear seat space into extra storage by sliding the seats out of the way. This allows Yamaha to keep the four-seater quite short by normal standards, allowing excellent maneuverability while still carrying full-size passengers. Pricing starts at $20,299 for the RMAX2 and $21,799 for the RMAX4, with top-level LE models reaching $23,799 and $25,799, respectively.