Home > Recreational vehicle > How the Toyota RAV4 has evolved from funky JDM concept to smash Hit. 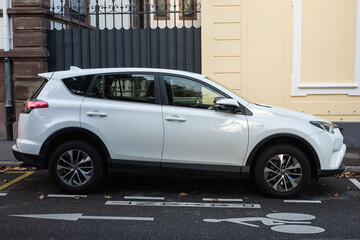 How the Toyota RAV4 has evolved from funky JDM concept to smash Hit.

The RAV4 isn’t just one of Toyota’s most successful products, it’s one of the most popular vehicles in the world—regularly sitting atop bestseller rankings and a symbol of the crossover SUV overtaking the sedan as the mainstream vehicle of choice.

Born in the Bubble Era
But it wasn’t always that way. In fact, the RAV4 evolved from a wild concept born out of Japan’s bubble era into funky micro-SUV of the 1990s before eventually getting on its path to dominance. And given just how ubiquitous the RAV4 has become, we thought we should go through a quick history lesson on how it all came to be.

The roots of the model go all the way back to the 1989 Tokyo Motor Show and the Toyota RAV-FOUR Concept. This was at the height of Japan’s bubble period—an era of economic prosperity that saw Japanese automakers go wild with funky, off-the-wall concept vehicles, many of which reached production.

The RAV-FOUR fit right into this mold, a compact two-door off-roader designed for all-terrain fun but at a size much more friendly for city use, and absolutely dripping with ‘80s character.

Soon after though, the economic bubble popped the and 1990s saw Japanese automakers reign in their wild, experimental ideas for more mainstream products, but the RAV-FOUR idea lived on—at least in spirit.

Standing for “Recreational Active Vehicle with 4 Wheel Drive” – the name resurfaced as “RAV4” and the production version would be a more mainstream version of the concept.

Creating a Crossover
Despite having “Recreational” in its name, practicality was the RAV4’s main goal—with a mission of combining SUV-like capability, cargo space and four-wheel-traction in a vehicle that delivered a more car-like driving experience and superior fuel economy compared to something like a Toyota 4Runner.

The first generation RAV4 rode on a platform that borrowed from the Corolla and Carina sedans—and was available in two-different body styles, a short-wheelbase two-door that resembled the original concept, and a four-door version that would prove much more popular.

While they were sold all over the world, RAV4s bound for North America were all powered by a 2.0 liter four-cylinder engine mated to either a manual or automatic transmission. And despite the name, base models were front-drive only with AWD being an option.

We might take it for granted today, but the first generation RAV4 was one of the key vehicles that helped launch the crossover SUV segment. It went on sale in America for the 1996 model year, and it quickly picked up momentum in the following years.

Creating a Segment
Not surprisingly, buyers were quite fond of the RAV4’s blend of “active looks,” a higher ride height, available AWD, easy-going road manners and its affordable price.

The first gen RAV4 was sold in the US from 1995 until 2000, with only minor mechanical and styling updates during the run. A two-door soft top model was added in 1998, and the most “recreational” of all RAV4s ever sold.

In the Japanese market there was even a version of the RAV4 powered by the 2.0 liter “BEAMS” 3S-GE engine, with its 177 horsepower helping make the little crossover into a bit of a pocket rocket.

Today it’s still relatively common to see first gen RAV4s on the road even though the newest examples are now over 20 years old, and they’ve developed a bit of a cult enthusiast following with some owners upgrading them for light off-road use, with the two-door models being especially notable.

An Emerging Classic?
Will a first-gen RAV4 ever be considered a classic? It’s not out of the question. And you certainly have to appreciate it, if only for its contribution to the industry.

From the end of the first gen production run in 2000 it would still be a while before the RAV4 would overtake the Camry and Corolla sedans in popularity, but the seeds were planted for massive mainstream success.

And that’s what we’ll cover next time when we conclude the history of the RAV4 with a look back from 2000 to 2022.