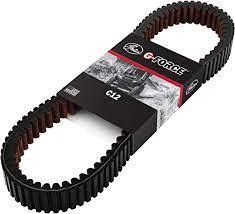 Over the last decade, Gates has built one of the largest portfolios of high-performance CVT belts, spanning hundreds of UTV, ATV, and snowmobile after-market applications.

Gates launched the first G-Force belt in 2011. Soon after in 2013, it added the G-Force C12 belt with carbon fiber tensile cords, the first of its kind in the entire industry. Then in 2019, G-Force RedLine was launched, which was the first off-road CVT belt designed with next-gen Ethylene Elastomer compound. When combined with its industry-leading aramid tensile cord and micro-fiber loading, it resulted in greater heat resistance (338°F) and longer life, especially important in high-power UTV applications.

G-Force’s history began well before the first belt sale 10 years ago. Research and development started in the mid-1990s to design a high-performance belt that could withstand higher axial forces, temperatures, and loads than stock recreational belts by optimizing the belt’s load-carrying tensile cord.

Once the cord and compound were perfectly optimized, G-Force was consolidated as a brand in 2011 to fulfill a key need in the powersports aftermarket. The premise was simple — to develop a CVT belt that would outperform under any demanding condition and give users a high-performance alternative to their stock OE belt.

“It’s been 10 years of material science, engineering, and manufacturing innovation by our incredible teams throughout the USA in Denver, Rochester Hills, and Siloam Springs that have brought us to this historic milestone. It’s a tribute to their hard work and collaboration that we celebrate this huge achievement in the powersports market,” said Joe Menzel, Global Mobility director.