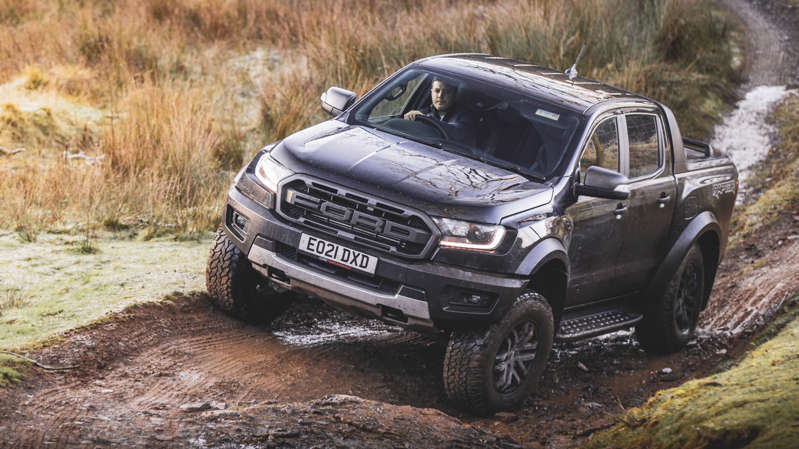 The Raptor slews wildly sideways, its General Grabber all-terrain tyres hurling clods of mud at the sky. It straightens with a snap, then I take a breath, gun the engine and accelerate towards the ramp.

With a belligerent roar, the truck gathers speed and the widescreen FORD grille aims upwards. There’s a second of dreamy suspended animation as the wheels hang in mid-air, then a wake-up wallop as the race-bred Fox dampers absorb the landing. Phew. Keep calm and carry on.

Plenty of pick-ups can go off-road with the right rubber, of course. But the Raptor’s ability to bound over rough terrain at blistering speed is unrivalled. On a rollercoaster dirt circuit meant for motocross racing, it feels unstoppable.

The original Ranger Raptor launch took place in Morocco in 2019. In blazing sunshine, we jumped over desert dunes, blasted along a deserted beach and finished the day with a camel ride.

This time, I’m in mid-Wales, we’ve substituted sand for mud, and there’s a steady drizzle. Also, the only animals present are a gaggle of bemused sheep. Covid travel restrictions have a lot to answer for.

Still, this new Special Edition version of Ford’s ‘badass truck’ (their words, not mine) looks more extrovert than ever. For £54,086 – a modest £900 more than a regular Raptor – you get front-to-rear racing stripes, 17-inch black alloy wheels, red recovery hooks and jazzier interior trim.

Whether in downtown Marrakesh or Merthyr Tydfil, you definitely won’t go unnoticed.

The flagship Raptor isn’t the only model to get a makeover. Indeed, with a new Ranger due in 2023 (expect all-American styling and 3.0-litre V6 engine option) the whole line-up has been reworked.

New additions to the Ranger, er, range include the Wolftrak, a ‘no-nonsense’ truck aimed at ‘customers in farming, forestry and outdoor pursuit industries’, the luxurious Stormtrak and the sporty MS-RT – the latter with a side skirts, faux carbon fibre trim and 20-inch OZ Racing alloys.

Ford hopes this flurry of new models will bolster the Ranger’s dominant position as the UK’s best-selling pick-up. “We have about 40 percent of the market and are aiming for 50 percent,” says PR boss John Gardiner.

Fun for the family

Some would argue the Raptor’s workmanlike 213hp 2.0 diesel engine is its Achilles’ heel. After all, the US-market Ford F-150 Raptor gets a brawny 450hp 3.5 petrol V6 – and there’s a tyre-smokin’ Shelby Mustang-powered V8 version in the works, too.

In truth, a payload capacity of just 545kg, compared with around 1,100kg for other Rangers, is mostly what holds the Raptor back. Being unable to carry one tonne means it isn’t classed as a commercial vehicle, so business users can’t discount the VAT. For many pick-up buyers, that means a price hike of nearly £17,000 versus a Stormtrak with the same engine.

Then again, the Raptor has never been a rational choice. Think of it as a fun vehicle (a more versatile, family-friendly alternative to a £50,000 sports car, perhaps) and its shortcomings are easier to overlook.

It’s certainly cooler than most performance SUVs – and far more capable, too.

That capability was demonstrated time and again in Wales, along green lanes, in a muddy quarry and on the motocross track. With 283mm of ground clearance, an 850mm wading depth and huge approach and departure angles, the Raptor is like the Terminator: it absolutely will not stop.

At times, the contrast between the brutal terrain and lashing rain outside, and my environment inside – soothed by a heated seat and listening to podcasts – seemed almost surreal. Surely off-roading shouldn’t be this comfortable?

Perhaps that’s why Ford saved the acrobatics for the end. Because the Raptor is best when pushed beyond your comfort zone. Two years on, there’s still nothing quite like it.