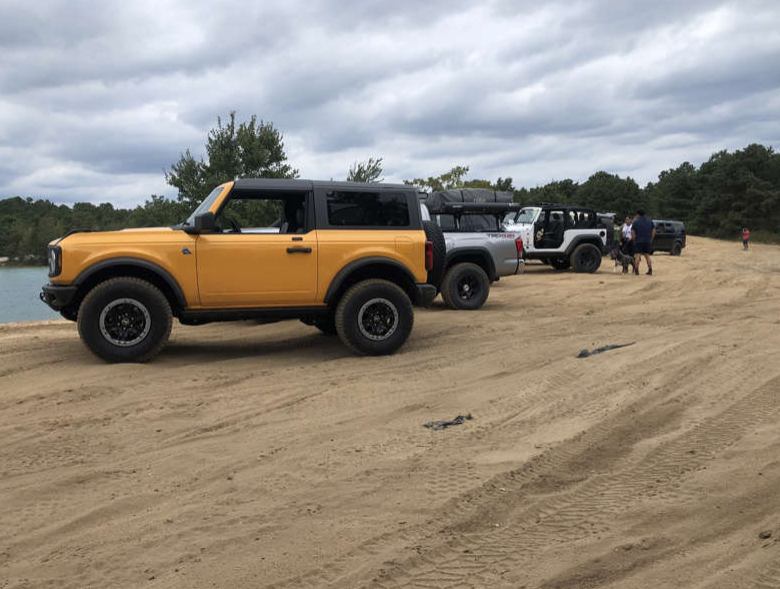 The hottest car in America isn’t a car, it’s a truck.

In its latest sales report, Ford revealed it sold over 8,000 Ford (F) Broncos in January. But try getting your hands on the all-new, full-size Ford Bronco SUV at retail prices — it’s basically impossible.

People are paying huge dealer markups to get their hands on the Bronco, or flipping them on eBay if they’re able to get a good deal for one. Ford CEO Jim Farley even addressed the situation, warning he would crack down on those dealers implementing huge markups.

A lot of this has to do with chip and component shortages hurting supply, along with production problems Ford had with the hard top versions of the Bronco that held up output. But the biggest problem of all could be that the hot new off-road SUV, with oodles of brand cred, is too popular. In fact, Ford stopped taking Bronco reservations when its official tally topped 125,000 back in August.

But that’s neither here nor there, or a problem for me at the moment. Ford kindly dropped off a Bronco in its Cyber Orange launch color for Yahoo Finance to review.

For those unfamiliar with the Bronco, the original truck debuted in 1966 as a compact type of two-door off-road vehicle, that later grew in size to compete with full-size competitors like the Chevy Blazer. Ford discontinued the Bronco in 1996 due to lack of consumer interest in two-door, full-size SUVs.

But as SUV popularity grew, and Jeep’s (STLA) Wrangler basically carved out an entire market for itself for the off-road focused, sand-dune set, Ford saw an opportunity. After years of teasing it, Ford finally showed off the Bronco in June of 2020 as a 2021 model.

The sixth-generation Bronco as we have it today is a full size, body-on-frame SUV that comes in two- and four-door models, offers two engines (a turbo I-4 cylinder or a twin-turbo V6), and comes in several trims based on what kind of activities a buyer envisions doing with the truck. It also can come with a manual transmission (!) with the base I-4, and can be optioned with the off-road focused “Sasquatch” package that can be added to any trim level.

Taking the Bronco where it shines
The two-door Bronco we tested came in Black Diamond trim (a more off-road oriented version), along with the 10-speed automatic transmission and V6 engine. Added to our Bronco was that aforementioned Sasquatch package, which adds a front-locking differential to our Black Diamond’s rear-locking differential, 35-inch tires with 17-inch beadlock-capable wheels, a 4.7 final drive ratio, high-clearance suspension, and high-clearance fender flares. In short, this Bronco really looked the part.

Driving the Bronco around the streets of NYC where I live was hair-raising at times — and a lot of fun. This truck is wide, with those big 35-inch tires and fender flares, so squeezing though narrow streets and darting through traffic can be challenge. But, you sit high up in the Bronco, and those big tires mean potholes, cracks, and ruts in the road mean nothing. Visibility is good (though blind spots are not great), and the truck’s controls and touchscreen interface (Ford’s tried-and-true SYNC 4.0) are easy to use.

At highway speeds, the Bronco in Black Diamond trim can be a little rough. There’s not as much sound-deadening material and such to keep the sound out, so you hear a lot of wind noise, creaks, and the like. Though the truck itself was a little squirrelly at high speeds, it was surprisingly quiet riding on those big 35-inch off-round tires and raised suspension.

But it’s off-road where the Bronco excels, and it was where I learned to really fall in love with the beast. My friends at Four Wheel Drive New York, led by the adventurous Shmuel Avital took me to some sand dunes by a lake in southern New Jersey. There we took some Wranglers, FJ Cruisers, and a couple Land Rovers through the brush and some deep mud ruts to the sandy dunes.

The Bronco is equipped with G.O.A.T. mode, or Goes Over Any Terrain mode, which gives you preset “tailored driving settings” like Sand, Slippery, Sport, Eco, and Normal, for whatever terrain you encounter. I selected Sand mode for the dunes, which engages four-wheel drive lock.

Though this was fine, my off-road buddies suggested just putting the Bronco in 4H (4 high) and locking the rear differential. Now we were in action — driving at a higher speeds over and through the dunes, with immense traction and speed coming from that locked rear axle. I felt like we were dune racing out in Baja, and it was an incredible amount of fun.

It was wet where we were too, with lots of mud and loose, wet gravel. Here is where the Slippery mode helped a lot, where the terrain is loose, wet, and uneven, the advantage of having a two-speed transfer case with the 4-low setting was necessary.

Pushing the Bronco near its limits gave me an appreciation for the truck’s capability and the sheer amount of fun you can have off-roading. It gave me a clearer understanding of why many enthusiasts do enjoy off-roading — and why they devote so much time and resources to pursue these adventures. Similar to auto racing and track driving, off-roading gives you a deeper connection with the machine, where you are almost one with the machine. But in this case going slower is where the connection lies.

At the end of the day, taking the Bronco off-road is really where it shines. It’s a shame that most buyers won’t take this capable machine off paved roads, but they should.

The Bronco, just like its rival the Jeep Wrangler, is an adventure truck, capable on almost any terrain on Earth. It’s raison d’etre is to take you anywhere, and it makes no apologies for its brawny and utilitarian looks as it takes you to your destination. And the buyers waiting months (and even years) to get their own Broncos wouldn’t have it any other way.

The Ford Bronco Black Diamond edition starts at $36,845. Our test vehicle with options and delivery came in at $47,990.