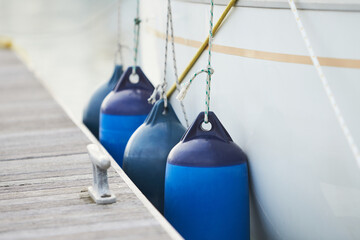 The quad engine concept vessel has a beam of 33.5 feet and has a projected speed of 29 knots, fully laden. It incorporate Hamilton Jet’s parallel hybrid EHX system using Hamilton HTX waterjets, powered by quad MAN2862 LE 438 Tier 4 engines. The EHX system will allow for zero-emissions operations when using battery power and will enable both station keeping and slow-speed operations, as well as boost power when needed.

The vessel design concept is based on the MO1, a proven vessel from Teknicraft Design that was built in 2013 to support the North Sea offshore wind market. The new concept design incorporates substantial updates and modifications, with the hybrid power system among its most noteworthy. As the exclusive builder for Teknicraft Design in North America, AAM believes that this design concept will prove itself in the fast-expanding U.S. offshore wind market and set the stage for AAM to expand into the manufacturing of CTVs and support vessels for the market.

The AiP is an independent assessment of a concept within an agreed framework. It AiP confirms that the design is feasible, and no significant obstacles exist to prevent the concept from being realized. The AiP also establishes trust in the solution, as it is grounded on solid technical standards, says AAM, adding that “for the emerging U.S. offshore wind market, establishing trust is essential.”

“There has never been a more exciting time for offshore wind in the U.S., and the significant demand for vessels needed to support the market is part of what is driving that excitement,” said Antony D’Souza, SVP and Regional Manager at DNV Maritime Americas. “We are proud to partner with All American Marine and Teknicraft Design for the Approval in Principle of this CTV design. DNV sees collaboration as a key to the industry’s success and achieving the 30 GW by 2030 target. It’s a pleasure to work with organizations like AAM and Teknicraft, who see the value of partnership and collaboration in the mission to achieve the industry’s common goals.”

AAM and Teknicraft have been in partnership for more than two decades. They say that, while the vessel designer and builder typically operate independently of one another, the exclusive relationship between AAM and Teknicraft applies a holistic approach. The partners’ design and production teams consider every detail of a vessel’s mission before the build phase, to ensure the construction of the most fuel-efficient, lowest wake energy, and best performing vessel in its class.