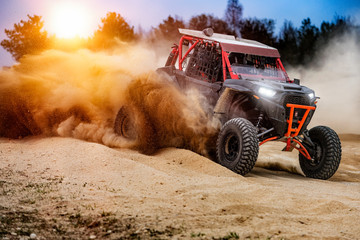 With world-class rock crawling and unbeatable views, Moab is one of the most iconic off-roading places in the United States.

“It’s just kind of a mecca of all things off-road,” said Lanse Chournos.

Chournos lives in St. George and loves exporing the terrain in Grand County with his family and UTV community. His passion led to being one of the organizers for the annual Rally on the Rocks event, which he said started in 2010.

“We were arguably the premier event in the western United States,” Chournos explained.

Rally on the Rocks, which usually takes place for one week each May, draws thousands of people from all over the country, and internationally from Canada and Mexico.

Chournos described how “The Rally,” as people call it, is a family event for all generations to come together. They can check out dozens of vendors at a trade show featuring big-name brands, and enjoy guided trail rides all throughout the Moab area.

“We’re doing it for the love of the sport, and the love of trying to help people out, and teaching them how to side-by-side responsibly,” Chournos said.

The town embraced their event at first, he said, and Chournos talked about steps the event took to be a good neighbor to those living in Grand County.

But things began to change over time.

“The primary reason and feedback we got from the politicians about the rally was the noise level,” Chournos said.

He said many people don’t like side-by-sides, and he believes the event was lumped in by residents with those who don’t ride responsibly through town.

Mary McGann, Chair of the Grand County Commission, said that she heard concerns from residents about the noise in town.

“They would drive around town from 6 o’clock in the morning, until sometimes after 12 o’clock at night,” McGann said, of what took place during the week of Rally on the Rocks. “And there would be lots of disturbance of people when they were asleep, and also just they drove in groups rather than single.”

A noise presentation to the commission in April stated that ATVs and motorcycles are louder than other cars, and the sound is equivalent to one to two semi trucks. It explained the negative impacts of noise pollution on communities and citizens.

McGann also mentioned a petition that she said got a few thousand signatures, also asking Grand County to tackle the noise issue.

The Grand County Commission tightened up the county’s noise ordinance and McGann said they made some permit requirements for the Rally on the Rocks event.

Chournos said the permit requirements would be impossible to meet and impose, and asks them to police their own group of people.

“We required that the participants sign a pledge committing to reducing noise levels when in residence and business areas,” McGann said. “The pledge will also include preserving, protecting and respecting the landscape, the community and the people.”

Chournos explained that they worked to keep the noise of UTVs in check.

“We mandated that all of our participants come with a stock [original equipment manufacturer] OEM exhaust, and not the after-market loud ones,” he said.

But there were also rules about regulating the UTVs and making sure they were all street legal, and Chournos said that would be up to law enforcement because the event can’t write tickets or enforce the law.

The noise ordinance also had to be followed.

“They had to make sure that all of their participants had the legal… that their machines hit the decibel level required by our noise ordinance,” McGann said.

“Checking and being able to see if somebody is over a decibel or not, in a live environment, where you have all these other components moving around you– it’s impossible to enforce,” Chournos said.

McGann said she worked with the Rally on the Rocks organizers to come to a compromise, and that she was sorry if they found the restrictions too strict.

“Our goal was to make it so that the event was not such a negative impact on the residents living in Grand County,” she said.

Chournos said he felt like they couldn’t do anything right.

“It was clear that their goal was to shut Rally on the Rocks down,” he said.

Rally on the Rocks recently released a statement explaining the cancellation for 2022. Instead, Lanse is helping organize a combined rally with a sister event called SXS Adventure, normally held in the fall.

The event is now titled SXS Adventure Rally on the Rocks and will take place during the normal ROTR May dates at Sand Hollow State Park.

Chournos expressed hope that the event can someday return to Moab — to both the iconic terrain and the town.